Passagem wine comes from Quinta das Bandeiras, a 100 hectare property located in the Douro Superior right on the river near Pocinho, opposite the famous Vale Meão. Until Vale Meão became well known in its own right, its grapes went into producing Barca Velha, the Vega Sicilia of Portugal.  So Bandeiras’s location couldn’t have been more perfect.   Bought by the Bergqvist family (Quinta de la Rosa) in 2005, the wine is a joint venture between Jorge Moreira (Poeira) and the Bergqvist family.

Passagem means a journey or a crossing such as a railway crossing.  There is an abandoned mountain railway line and crossing on the property that inspired the name.  The local area is full of history of journeys and crossings…from the prehistoric times at Foz Coa (pre historic cave paintings) to Roman and medevial roads, the eighteenth century railway nearby and the now the fast road below us.  And of course Jorge is exploring a new terroir which will produce very different wines in the Douro Superior. 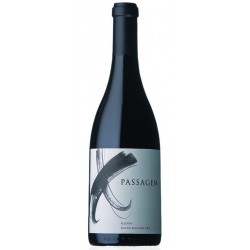